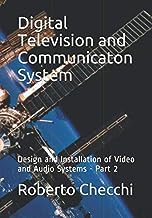 In this second book of the “Digital Television and Communication System” series, the audio and video workflow in production and broadcast transmission systems are described in depth.In these fields we describe the techniques of transmission of digital television signals (analog and digital modulation systems, the ATSC and DVB standards), the techniques of audio and video recording both analog and digital, the recording media (magnetic, optical and magnetic -optical), the related recording standards, including the most advanced for recording UHDTV signals.One chapter is dedicated to advanced technologies (4K UHD and 8K Super HI-Vision), technologies for 3D images, internet technology, that for film capture and post-production and archiving.The last chapter is dedicated to image acquisition, with an in-depth analysis of the cameras in use today, their sensors, the optics adopted and their use in the shooting phase and their functions and adjustments.The text contains all the basic information necessary for the cultural background for anyone who operates or wants to operate in television broadcast systems at a professional level, providing them with complete support for the operational and system choices to obtain the desired technical quality of their product. The book is also a great reference point for anyone dealing with high school and university studies related to the broadcasting and production of audiovisual products.